Addressing the national water demand in an increasingly sustainable manner

The Malta Sustainability Forum (MSF) event ‘Accelerate for Water Security’ was held on 23 June 2022. Liana DeBattista, APS Bank plc, Chief Strategy Officer summarises the main discussion points from the event. As highlighted in my concluding remarks, all speakers emphasised the importance of this resource, as we are entering the century of water.

Water will become the defining natural resource of the century, that will shape modern society and the global economy. Thus, making SDG 6 (Sustainable Development Goal for clean water and sanitisation), the most important SDG for us all, a point aptly made by Giovanni Bartolotta, APS Bank’s CRO, in his welcome address. He also mentioned that 1.1 billion people worldwide do not have access to safely managed drinking water, and another 1.4 billion people do not have safe sanitation. The UN estimates that by 2030, 700 million people could be displaced because of water scarcity. Apart from the 8 billion people residing on our planet, we also need to think of other species that also need water to survive and to thrive. 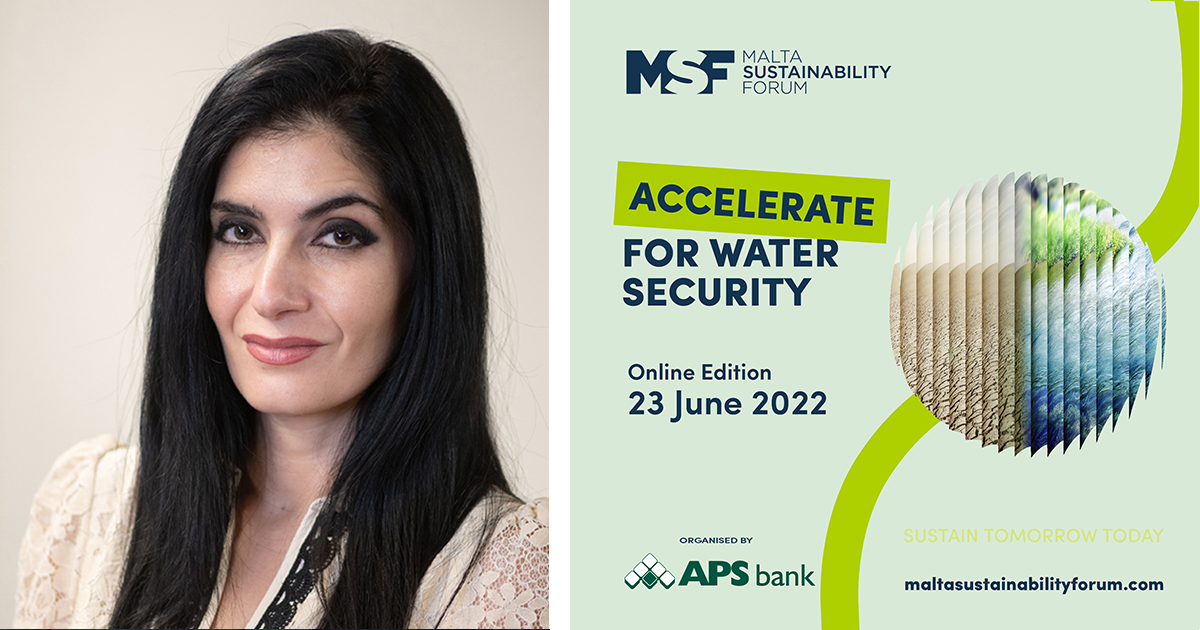 We were honoured to have Minister Dalli participate during the event, who pointed out that since the 1980s Malta has advanced substantially in the conservation of potable water. She outlined that in Malta, people use around 110 litres of water per person per day, nearly half of the 200 litre EU average. She referred to several initiatives relating to the management of water resources, the preservation of rainwater and the treatment of wastewater for reuse, which Ing. Ronald Pace from the Water Services Corporation discussed in further detail. He explained that groundwater is not enough to meet the demand, given that Malta’s economy and society evolved significantly. This challenge led to investment in the reverse osmosis (four plants), and to continuously being on the lookout for better technologies.

Minister Dalli also referred to the work of Government Agencies who are working on educational campaigns. In fact, the Energy and Water Agency (EWA) was an integral part of the event, with the CEO, Manuel Sapiano, presenting on the topic, ‘Understanding Water Scarcity’. He stated that Malta has a lot of aridity, low rainfall and a high-density population, which sets the island at a disadvantage. Mr Sapiano stated that the future is challenging, and he cited Prof. Charles Galdies on the issues of increasing temperatures and decreasing annual rainfall. Yet, he pointed out that there are good foundations on which to build water management. He concluded that everyone has a role in ensuring a security of supply in a sustainable manner. Another two presentations were delivered by Amanda Zahra and by Joseph Zahra, representing EWA, who explained how we can all reduce water waste in our everyday life.

Bettina Doeser from the European Commission delivered a keynote speech where she unpacked the many initiatives that the European Commission has embarked on, in tackling water scarcity. She stated that water scarcity is a problem across the EU and highlighted that water scarcity is not the only issue, as challenges for the water resources in the EU are manifold. The most pressing issue is climate change. In parallel, the EU is experiencing a biodiversity, resources and pollution crisis, which are all interlinked. The COVID-19 pandemic and the war in Ukraine have also had an impact on water security.

During the panel discussion held on the topic of ‘What are businesses doing to create a water-secure future?’, moderated by Perit David Xuereb, Dr Ing. Paul Refalo stated that not enough is being done and highlighted the expense around creating quality water. Ing. Marco Cremona stated that in the future, desalination will become a more important water supply, since groundwater is becoming less reliable in terms of quality. Joe Tanti, from MBB, highlighted the three challenges for business. Firstly, obtaining financing is difficult, as water investment requires a longer repayment period. Secondly, technical support knowledge is limited at several organisations and thirdly, planning is complex. Joe Tanti referred to the work undertaken to obtain EU financing on water sustainability.

The last presentation was by Alexandros Kandarakis from Global Water Partnership – Mediterranean who gave an overview of the “Alter Aqua” project, which aims to increase Malta’s water resilience. He highlighted the need for Malta to diversify its water sources. The main approach of the project revolves around the collaboration between the private and the public sector and involves educational activities, raising awareness and capacity building. This project saw the renovation of old underground reservoirs across the Island, which are part of our heritage.