Pension reform: why has it not made pensions adequate?

It seems like a long time since – as a journalist – I started writing about the pension reform. That is probably because it is: 18 years to be exact.

So much has changed over the decades since pensions had been introduced to the island: from an aging population to longer life expectancy; from the country’s economic make-up to the number of women in the workforce.

The Pensions Working Group, chaired by David Spiteri Gingell, was set up in June 2004. It was by no means the first review of the pension system on the island. In 1997, the MCED commissioned a report with various other reports presented until the World Bank submitted its own in March 2004.

The 2004 Working Group introduced two concepts into the vocabulary that are still a priority to this day: sustainability and adequacy. It was all about modelling the future.

From the government’s point of view, demographics were showing that there would not be enough money paid into the system by employees in the future to sustain the pensions it knew it would need to pay out.

From the pensioners’ point of view, it was all about how much they would have to live off in their retirement, and whether it would be enough to sustain their lifestyle.

The Working Group report in November that year raised red flags about both sustainability and adequacy, and rang the alarm bell: pensioners should not rely on their retirement income to come solely from the government. Pensions suddenly had three pillars, one of which was private pensions. The retirement age was raised in a staggered way.

And where are we today: Mr Spiteri Gingell reported recently that by 2021 only 13,672 had taken up private personal pension schemes, and only 1,685 an occupational pension. 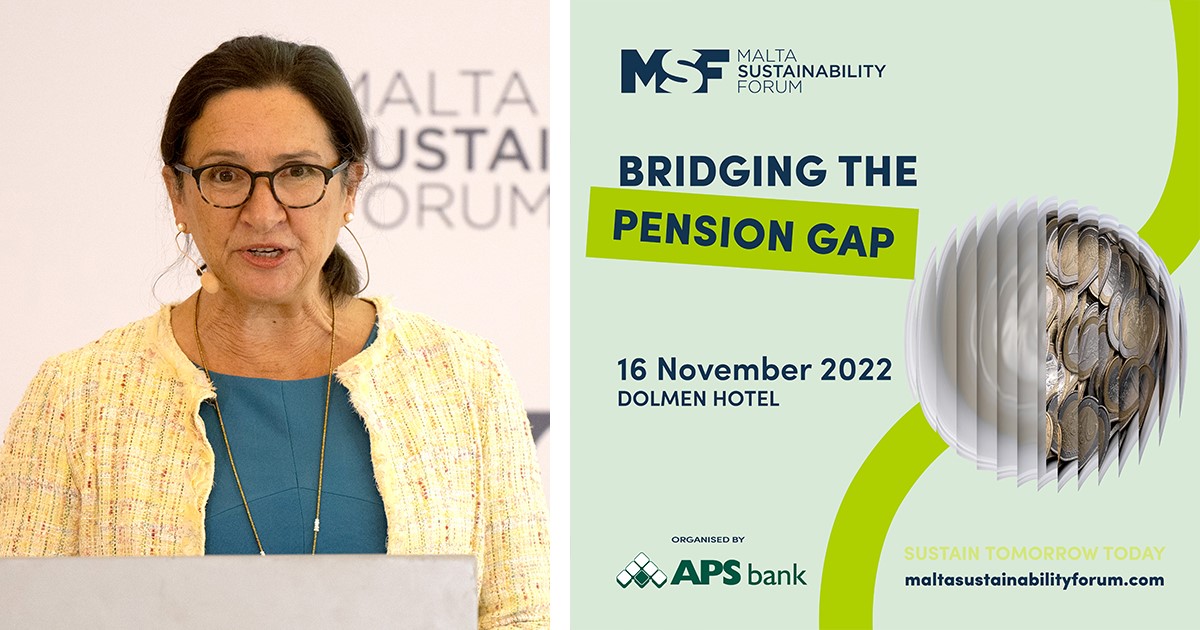 The conference organised recently by the Malta Sustainability Forum – which was set up by APS Bank in 2019 – was an opportunity to understand how we got to this sorry situation, as well as to stimulate debate on the best solutions going forward.

Mr Spiteri Gingell described the lack of action in the first few decades of the ‘two-thirds’ pension as “a sad reflection of where we are”, blaming the “apathy” of politicians in successive legislatures.

He was also frank about one of the main reasons for the failure of the second pillar pension: his 2006 proposal for the occupational pension scheme – based on the trends of nearly two decades ago – was based on mandatory contributions. This, he now acknowledged, was one of the reasons that the reform had failed.

The majority of social partners on the panel were for auto-enrolment (none were actually against the concept) where employers automatically enrol their employees, but on a voluntary basis, meaning that they can opt out if they want to. This overcomes the behavioural inertia that stops people from starting to save and the procrastination that stops them from doing something about it, even once they realise its importance.

There were other recommendations: a flexible transition from working life to retirement for those that want to slow down and work less, rather than take full early retirement. And clearly, education is also the key to jolting people into awareness that their pensions might not be adequate. The ‘two-thirds’ pension has become such a part of our vocabulary that we do not stop to think that this is pretty much a myth for more and more people: it is only those who earn around €25,000 per annum that would get this; those who earn €50,000 per annum, for example, would only get 35% of their income as a pension, quite a drop if you wish to sustain your lifestyle in retirement.

The conference discussions revealed numerous issues that auto-enrolment would not be able to solve with regards to specific segments of the population: even the UK, which has had auto-enrolment for over a decade, found recently that more than 60% of the participants would still not have an adequate income.

Finance Minister Clyde Caruana, who gave the keynote speech, left no room for doubt: economic growth may have made pensions more sustainable, but adequacy is a problem that will get worse with time. He embraced the need to incentivise more people to stay in the workforce up to and beyond their retirement date – something the government has already started to do through the recent budget. But he never mentioned auto-enrolment and there is no indication what the government’s stand would be. In an important show of unity that was unthinkable in 2004, both the Chamber of Commerce, Enterprise and Industry, and the General Workers’ Union have proposed it as a solution.

There are obstacles and considerations – such as the property market, trust in pension products, and the risk of creating social inequality – which will be explained in a separate article. However, the president of the Chamber Marisa Xuereb (with GWU general secretary Josef Bugeja’s full support) sees no reason why auto-enrolment could not be introduced as early as next year, in a phased approach starting with the younger cohort. The draft legislation for it has even been drawn up. All that is needed is the government’s green light.

Back in the early days, some politicians scoffed at the whole idea of a pension timebomb – why? Because it would not happen with the myopic five-years of a politician’s lifespan. Like climate change, there are some things which just cannot wait…